After 14 years and 27 deaths while being constructed, the Brooklyn Bridge over the East River is opened, connecting the great cities of New York and Brooklyn for the first time in history. Thousands of residents of Brooklyn and Manhattan Island turned out to witness the dedication ceremony, which was presided over by President Chester A. Arthur and New York Governor Grover Cleveland. Designed by the late John A. Roebling, the Brooklyn Bridge was the largest suspension bridge ever built to that date.

John Roebling, born in Germany in 1806, was a great pioneer in the design of steel suspension bridges. He studied industrial engineering in Berlin and at the age of 25 immigrated to western Pennsylvania, where he attempted, unsuccessfully, to make his living as a farmer. He later moved to the state capital in Harrisburg, where he found work as a civil engineer. He promoted the use of wire cable and established a successful wire-cable factory.

Meanwhile, he earned a reputation as a designer of suspension bridges, which at the time were widely used but known to fail under strong winds or heavy loads. Roebling is credited with a major breakthrough in suspension-bridge technology: a web truss added to either side of the bridge roadway that greatly stabilized the structure. Using this model, Roebling successfully bridged the Niagara Gorge at Niagara Falls, New York, and the Ohio River at Cincinnati, Ohio. On the basis of these achievements, New York State accepted Roebling’s design for a bridge connecting Brooklyn and Manhattan–with a span of 1,595 feet–and appointed him chief engineer. It was to be the world’s first steel suspension bridge.

Just before construction began in 1869, Roebling was fatally injured while taking a few final compass readings across the East River. A boat smashed the toes on one of his feet, and three weeks later he died of tetanus. He was the first of more than two dozen people who would die building his bridge. His 32-year-old son, Washington A. Roebling, took over as chief engineer. Roebling had worked with his father on several bridges and had helped design the Brooklyn Bridge.

The two granite foundations of the Brooklyn Bridge were built in timber caissons, or watertight chambers, sunk to depths of 44 feet on the Brooklyn side and 78 feet on the New York side. Compressed air pressurized the caissons, allowing underwater construction. At that time, little was known of the risks of working under such conditions, and more than a hundred workers suffered from cases of compression sickness. Compression sickness, or the “bends,” is caused by the appearance of nitrogen bubbles in the bloodstream that result from rapid decompression. Several died, and Washington Roebling himself became bedridden from the condition in 1872. Other workers died as a result of more conventional construction accidents, such as collapses and a fire.

Roebling continued to direct construction operations from his home, and his wife, Emily, carried his instructions to the workers. In 1877, Washington and Emily moved into a home with a view of the bridge. Roebling’s health gradually improved, but he remained partially paralyzed for the rest of his life. On May 24, 1883, Emily Roebling was given the first ride over the completed bridge, with a rooster, a symbol of victory, in her lap. Within 24 hours, an estimated 250,000 people walked across the Brooklyn Bridge, using a broad promenade above the roadway that John Roebling designed solely for the enjoyment of pedestrians.

The Brooklyn Bridge, with its unprecedented length and two stately towers, was dubbed the “eighth wonder of the world.” The connection it provided between the massive population centers of Brooklyn and Manhattan changed the course of New York Cityforever. In 1898, the city of Brooklyn formally merged with New York City, Staten Island, and a few farm towns, forming Greater New York. 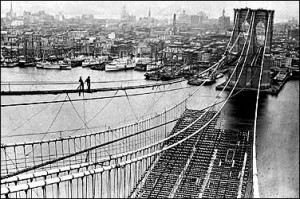 The Museum of the City of New York Print Archives (www.mcny.org)

This entry was posted in Uncategorized. Bookmark the permalink.