CLOSED: Places We Never Got To See or Will Never See Again – (post 1 of a series)

Posted on February 26, 2012 by Administrator

Often when I am searching the web for current travel itinerary’s I find information on places that no longer exist.  I have discovered that once I run across a closed attraction I become obsessed with finding out all the information I can on the place, of its once thriving existence, its ultimate demise and its possible re-birth.

This I have decided will be a reoccurring series of post in my blog.  Something to fill the space when I am not posting about our current traveling adventures.

MARINELAND OF THE PACIFIC

On August, 1954, Marineland of the Pacific opened its doors to the public for the first time.  Located at the tip of the beautiful Palos Verdes Peninsula in Los Angeles County, California, it was the largest oceanarium in the world.   Five million dollars were invested in the project to make it the most unusual cultural, educational and entertainment center on the Pacific Coast.

An hour’s drive from where I grew up in Garden Grove California was the magnificent Marineland of the Pacific. 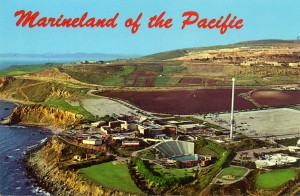 This was an often frequented attraction in my youth.  Being a single parent in the late sixties and early seventies, my mother, who worked two jobs to provide us with a “middle class” lifestyle, often had to forgo vacations, therefore, I believe she compensated by taking us to local attractions as frequently as she could.  I remember at the end of spending a day at Marineland of the Pacific I felt exhausted, (I am thinking maybe the sea air, as I could spend more time at Disneyland and never felt tired).

I was always a collector and souvenir hound and one of my favorite things about Marineland of the Pacific was there were vending machines throughout the park where you could insert your coins, and out would pop a molded plastic replica of a sea animal.  Boy I sure wish I had all those collectibles from years ago (a long story of how all those were lost, and a story not suitable for this blog). 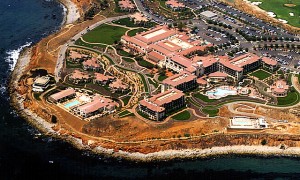